CROSSHILL TENNIS CLUB LAND WAS THE SITE OF THE FIRST BLACKBURN ROVER'S GROUND! 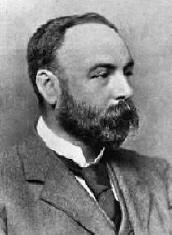 First British President of FIFA 1906 – 1918, lived a 1 Crosshill Road and was the first President and Treasurer of Crosshill Tennis Club.

Daniel Burley was a pupil at Blackburn Grammar School and later joined the Income Tax Office, situated in Richmond Terrace.  By 1881 he was living at 54 Oswald Street with his mother Eliza and was Assistant Clerk to the Commissioner of Taxes.

By the time of the 1891 census Daniel had risen to the rank of Clerk to the Commissioners and was living at 48 Adelaide Terrace with his wife Eleanor, who was from London, and children Daniel and Dorothy. There was a maid too, Lucy Wood from West Handley in Derbyshire.

Daniel was elected President of FIFA in 1906. He had acquired experience on the Board of the Football Association and did much to bring English and continental football together. An international competition was held at the London Olympic Games in 1908. England won that and the next competition at the Stockholm Olympics in 1912. Argentina and Chile joined FIFA in 1912 and the USA a year later. The First World War put an end to international competitions and Daniel Woolfall died in 1918, however the groundwork had been done. Daniel had standardised the rules of the game and laid the basis for the future success of the World Cup.

Woolfall was president during a period when a dream of an international competition was in the air, but making it a reality was still a long way off. Woolfall’s period in office can be characterised briefly by four main themes: efforts to simplify the Laws of the Game, running a tournament as part of the Olympic Games in London in 1908, enrolling the first non-European member countries into FIFA and dealing with the logistical problems posed by the First World War.

Blackburn Times – October 26th 1918
Mr D.B. Woolfall, Hon. Treasurer of the Football Association and president of the Lancashire Football Association, died on Thursday morning. He was 66 years of age. Mr. Woolfall was clerk to the Commissioners of Income Tax for the extensive district of East Lancashire, and was a prominent member of St. John’s Church. He had a long and close connection with football. Originally he was associated with the Blackburn Rovers and served on the committee for some time but was not a playing member of the famous club. He was a representative of the Rovers on the Lancashire Football Association, to the Council of which important organisation he was elected a member no fewer than 37 years ago. He subsequently became a vice-president and in May, 1901, was selected as president of the L.F.A., a position he held at the time of his death. Mr. Woolfall rendered important service to the Football Association, of which he was appointed Hon. Treasurer in 1900. He was an international jurist in connection with the Olympic Games in Stockholm in 1912, and was president of the Federation Internationale de Football Association instituted at Paris in May, 1906. He was secretary of the East Lancashire Cricket Club.

June 2006  –  Lancashire Evening Telegraph
The globe is going World Cup crazy but few know that the idea kicked off in Blackburn! Frenchman Jules Rimet is universally acknowledged as the man who launched the World Cup in 1930. But it was Blackburn man Daniel Woolfall who was actually responsible for starting the ball rolling when he dreamed up the notion of a global competition almost 100 years ago. And now the first British president of FIFA has been honoured by Blackburn Civic Society for his contribution to the beautiful game.

A plaque has been unveiled outside Woolfall’s former home in Crosshill Road, by former Blackburn Rovers and England star Ronnie Clayton, commemorating the place where the World Cup was dreamed up.

Woolfall, who lived there from 1906 until his death, was elected second president of world governing body FIFA in 1906 and raised the idea of a World Cup. He got the British football associations to sign up alongside their European colleagues, reorganising the modern game and introducing a number of universal rules.

Then on FIFA’s behalf he organised an international tournament as part of 1908 and 1912 Olympics in London and Stockholm, which Great Britain won. Woolfall’s vision of a World Cup moved closer when Argentina, Chile and the USA joined FIFA between 1912 and 1913. 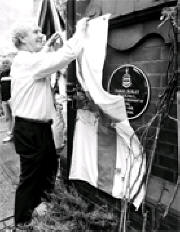 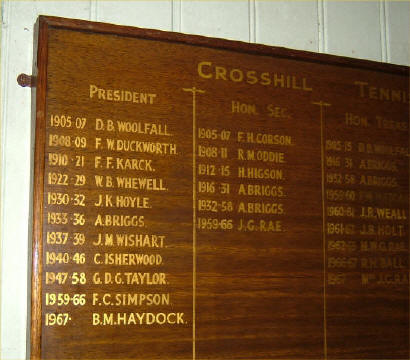 However Woolfall’s dream was interrupted by the outbreak of the First World War. Though international matches were played, he died in 1918 aged 66. It was not until 1930 the first World Cup was held after FIFA’s next president, Frenchman Jules Rimet, took up Woolfall’s quest. A spokesman for FIFA said: “The idea was right but the timing was a problem, with World War One causing great difficulty. The dream of an international competition seemed to have faded completely when Daniel Burley Woolfall died in 1918. “His successor Jules Rimet was the man who revived the dream and made it a reality.”

Clive Young, 61, of the Civic Society said members were alerted to Mr Woolfall when looking at a list of names people from the town to see what significance they had. He said: “Obviously this FIFA person sprang out of the pages and required some sort of recognition. “He was a son of Blackburn and it seemed to be appropriate to do something like this in World Cup year.

“Daniel Woolfall really motivated everyone and got everyone together and the present system was set up.”

Woolfall was a pupil at Blackburn Grammar School and later worked as a clerk in the East Lancashire income tax office in Richmond Terrace. He was married to Eleanor and had two children, Daniel and Dorothy.

As well as being president of FIFA, Woolfall also served on Blackburn Rovers’ committee and was president of the Lancashire Football Association when he died.

He was also president and treasurer of Blackburn Tennis Club which lies on the site where Rovers played their first ever game in 1876 at the back of the house.
David Higginson, 58, who has lived at the house for 34 years, said he did not know of the previous occupant until the society contacted him. He said: “It is astounding to think he lived here and this is where it all began.”

Ronnie Clayton who played more than 700 times for Blackburn and won 36 England caps, added: “I feel very honoured to have unveiled it.”

It was a rented piece of farmland near Preston New Road. The ground was little more than a meadow with a pool in the middle that had to be covered with planks and turf when playing, but it did allow the club to collect gate receipts totalling 6s 6d for the season. Rovers subsequently moved on to Pleasington Cricket Ground the following season then onto Alexandra Meadows, all in the space of three years. In 1881 they moved to a new rented ground in Leamington Road.

Their final move to the permanent site of Ewood Park, came in 1890 when the rent for the Leamington Road ground was increased. Rovers quickly rose to fame. In the 1881-82 season they reached the FA Cup final, eventually winning the trophy in 1884. From then they won the FA Cup in 1885, 1886, 1890 and 1891. The team continued to flourish and became League champions in the 1911-12 and 1913-14 seasons. That period up until the First World War was a golden age for Rovers.